As soon as his mother had left the room and her sister had gone to the bathroom, he jumped out of bed and looked at the horn.

He couldn't believe his eyes when he saw the horn shining in the bright light of day. Never before had he seen a colour like that. Hold on, wait, he had actually seen that colour before, it was the colour of the stars. The horn was made of gold.

“Bluegirl,” he cried as she returned from the bathroom,
“look at that!”
“What's up?“ Bluegirl asked,
“will you please stop bothering me?“
“But look at this horn!“
“Oh, wow”, Bluegirl shouted when she saw the golden horn in her brother's hand.
“This is certainly the most beautiful thing I have ever seen in my whole life. What colour is it? Is it gold? It looks like the stars in the heavens!”

So Blueboy took the horn to his blue lips, closed his eyes, and blew and blew. While he was playing something strange happened: the blanket of his bed became purple, the cover of Bluegirl’s bed became pink, the wardrobe became brown and the flowers in the vase became red. The carpet on the floor was green now, Blueboys trousers turned to black and the cover of the Beatles’ White Album became white.

“Wow, that’s amazing, what’s the cause for this? How is it possible? May I hold it just for a short time?” Bluegirl stuttered.

“It’s magic,” Blueboy whispered. They had never seen any of those colours before, so they did not even know any of their names.

“Play on!” shouted Bluegirl and Blueboy played the finest tune she had ever heard. Tears ran down her face as everything in the room changed its colour. 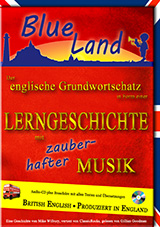